You are at:Home»第十一期»Tim, Kasih Sayang Kluang!

Kluang, the town I mispronounced as Klang. This so called “small” town (isn’t small to me as there is only 9,000 in mine) of almost 300,000 people has welcomed me and my lifestyle into their homes, cafes, restaurants and hearts. I hitch hiked from Johor Bahru to Kluang in the afternoon and my ride took a large detour, so I arrived in the evening. 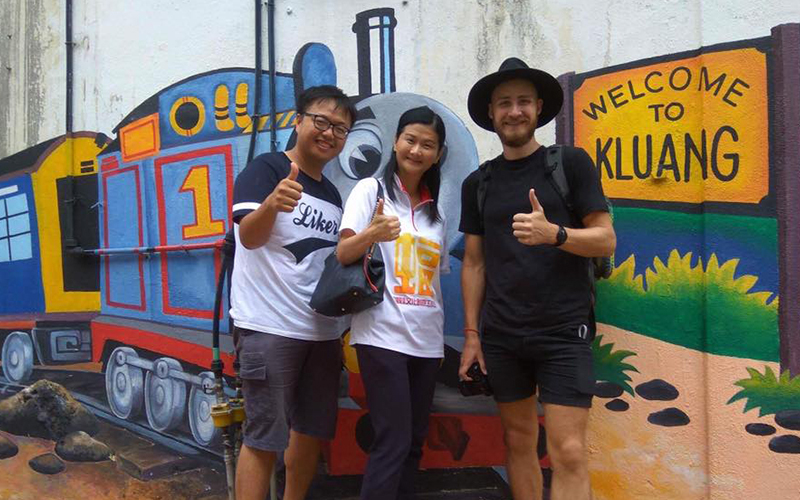 First up I met my dearest host Fiona, the founder of Kluang Star News. We also met her colleague and friend Nelson and her very energetic son.

We all went straight to a spectacular lane full of art done by different artists and it has been turned into a pedestrian way. The art consists of cartoons, superheroes, interactive art and local themed things such as bats and local football players. 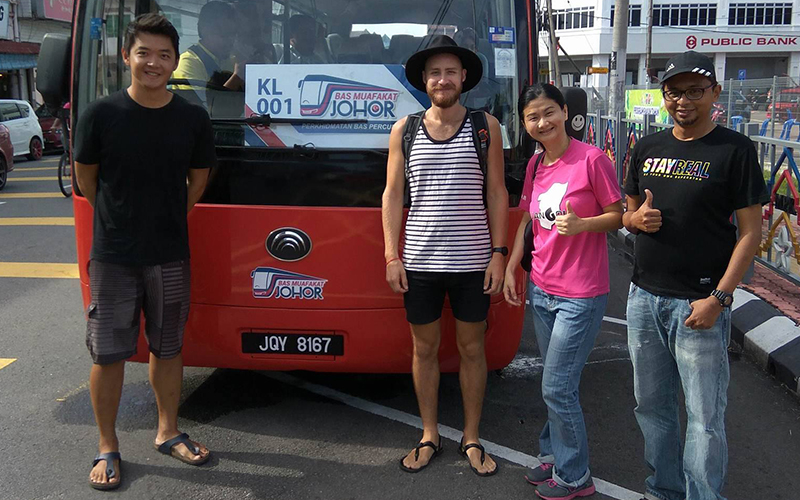 After we completed admiring the local art we headed over to the Jubli Intan Hall to see the grand opening of Kluang’s new bus service. The bus will be helping the underprivileged, the elderly and students, and will be free of charge. We strolled through the park and checked out the free gym (yes I said FREE). It’s indoor and decked out with very useful equipment that I would certainly be using if I lived there. There is also an outdoor gym for people who like the fresh air.

We kept on moving on and went around the corner to a small shop that sells an interesting alcohol called Tori (Coconut Palm wine). People climb the tree and tie of the flowers so the sap stays within the flower. The sap that is usually produced to grow the fruit starts to naturally ferment from wild yeast in the air. It is later transformed into a delicious coconut wine. It has a funny fermented smell, but the taste is quite nice and is about 4% abv, so it won’t hit you too hard. Next up we wandered little India street until we came across a small Indian restaurant making roti right out the front. We went inside and ordered some different types of roti for our dinner. Later on we went to The Storyteller Facebook Cafe. Now in Australia, I would never usually go to a cafe at 10:30pm, however this is Kluang, so..do as the Kluangans do. This spacious cafe had me as soon as I entered. We went in and the atmosphere caught my attention straight away. It was very warming, and made me very comfortable and at home. We were welcomed from a distance by the very busy and polite owner Huangyi Chau. We ordered some drinks and chatted into the night discussing travel and life. 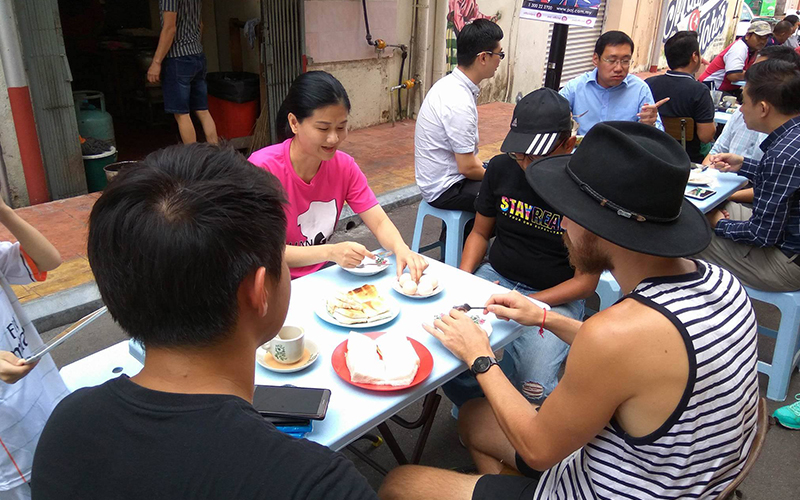 Day 2 The next morning we went to a local kopi cafe. The back of it backed on to the pedestrian Way with all the art. I was introduced to many of the locals and was always greeted with very large smiles. 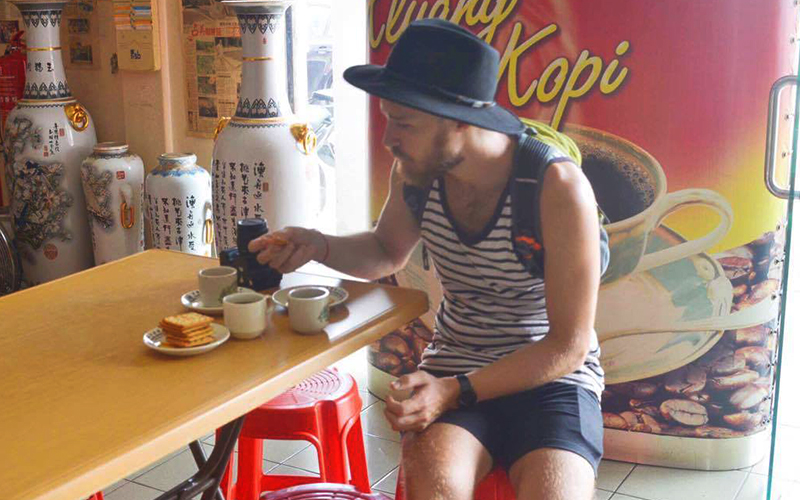 After breakfast we drove to the Coffee Powder Factory. We got toured around by a local and friend of Fiona’s. We learnt the process of the different processes of coffee he made and the styles of packaging. After the tour we got to taste test the three different coffees along with the appropriate cream crackers. After this it was another cafe for more coffee! It’s quite well known that people in Kluang love Yum Cha, and they will do it anytime a day. 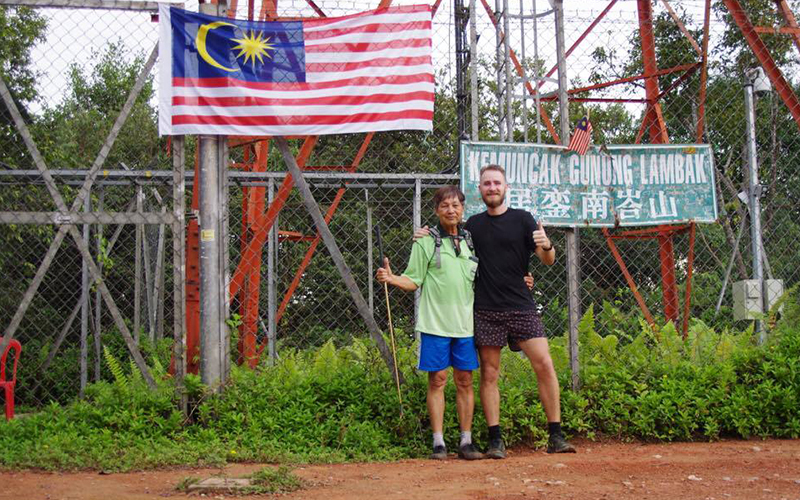 Later in the day when it was a little cooler and the rain had passed we decided to hike the local mountain with the bat shape on the top. It’s called Kemuncak Gunung Lambak. It took us about an hour to hike up and down. I did the hike together with a 75-year-old gentleman called Mr Leong. I was very surprised with his fitness. He supposedly does the hike every day.

Day 3 We went for breakfast at Kluang Rail Coffee. It’s a very popular halal cafe right on the platform at the train station. We tried the laksa, nasi lemak and some of the traditional toast. All very tasty. 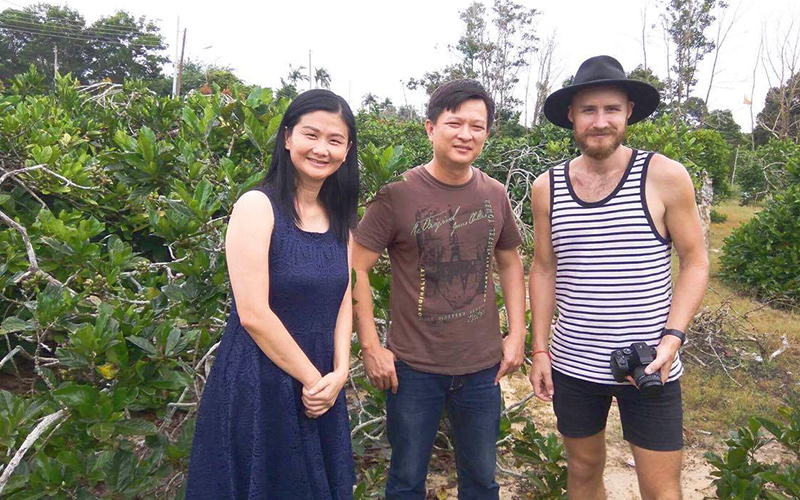 After breakfast we drove out to a local herb farm to meet Sean for a small tour. He showed us all his natural herbs and how he produces his high quality teas. He doesn’t use any pesticides and he allows many species to grow randomly around his farm including fruit trees to try to sway pests from eating his herbs. Along the way back to his workshop he showed us the rubber trees and how they cut into the tree to collect the sap. Surrounding the area there was also some dragon fruit farms, Liberica coffee farms and the obvious palm trees. 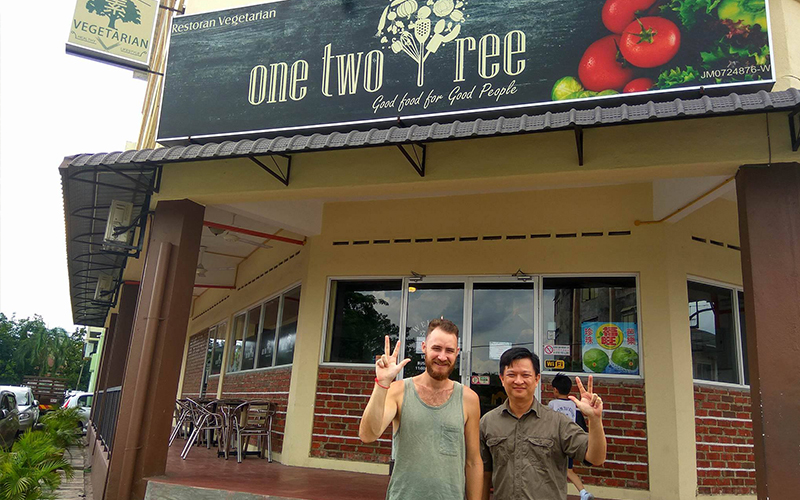 One Two Tree We had some creative vegetarian food in the restaurant called one two tree. I love this name a lot. The cook has successfully turned vegetarian food into modern western style, Japanese style and Asian style. I tried the soup noodles and the texture of the noodles was very good. 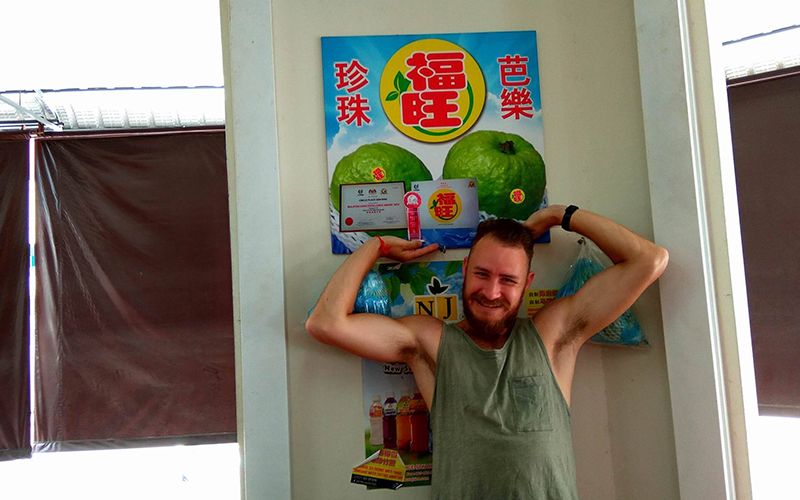 I had their guava called “Fu Wang” and it was sweet and not as hard as what I had tried before. 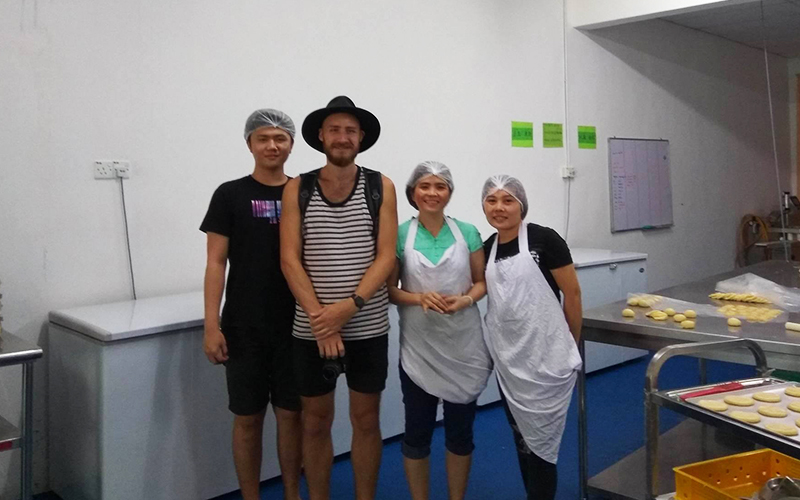 I was fortunate enough during my stay to do some taste testing for Huangyi’s new restaurant at “Old-time Street” and you see, above it was the leftover from our taste testing. I also went to a Traditional Chinese moon cake bakery “Nam Yick” and watched the bakers make the biscuits. Unfortunately it was not moon cake season so we didn’t get to try any of them. We tried the delicious biscuits instead. The family has had the business for about 70 years. He showed us the old wooden tools his ancestors had to use back then. The owner mentioned the lion dance shop across the road, so we also checked that out. Unfortunately I missed my picture opportunity to snap one of the lion and dragons because I was so entertained by the fake human head. I was playing like a child. Also other things I got to try were the goats milk from the local goat dairy LA Farm. Very delicious.

I got to learn a little about Feng Shui. The Fengshui master’s teaching was a bit too philosophical for me to grasp. But it was the gesture that counts. I experienced durian for the second time and actually enjoyed it this time.I experienced a meridian therapy at Rejeune. It is said that the therapy penetrates deep into meridians, clears blood vessels, nourishes internal organ cells, reduces aging symptoms from the inside out and strengthen immune system. I learned something about the acupuncture points and it is quite interesting. I met up with Huangyi and his wife April again and we went out for lunch at De a Mano. The food was gourmet handmade western style. Burgers, pizzas and pastas. All hand made with fresh ingredients and lots of love. 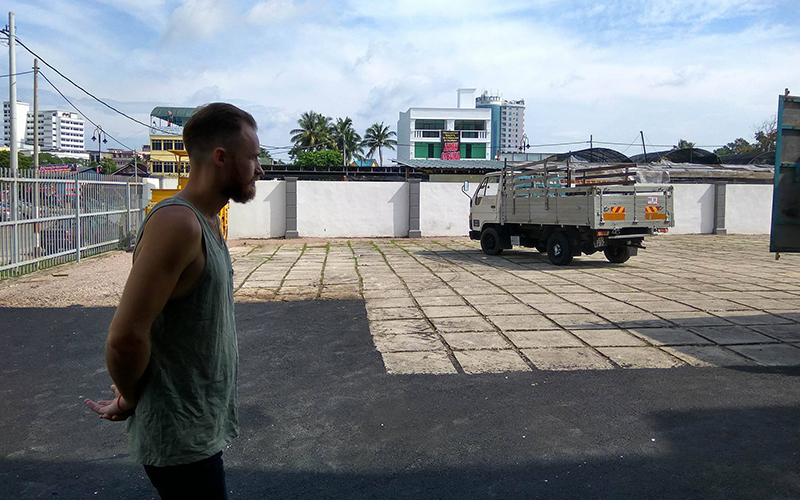 Lastly, I went back to Fiona’s office at Kasih Sayang Kluang. The place is under renovation and I look forward to its transformation. Fiona asked me what I would do to the land if I had the right to it, other than being a car park. Well, if this was my land ,yes , it could be as simple as a car park. However this valuable land yearns for energy and more life. So I would build a large building in the back. This building would be used as a community arts centre. Children, adults and aliens of any race may join. Things such as drama classes, painting courses, breakdancing and music shows. Anything to do with the arts will be welcome. Out the front I would put a large garden full of delicious herbs and vegetables. Many of which could be used in the cafe itself. This would be to teach the younger generation the importance in self sustainability and how we have lost our way with plastic and waste. Within the garden there would also be a section for compost. Another thing for the younger generation to grasp and learn. If we all learned to recycle, separate and reuse things, Malaysia, may be a lot cleaner.